Should naloxone be available to everyone? 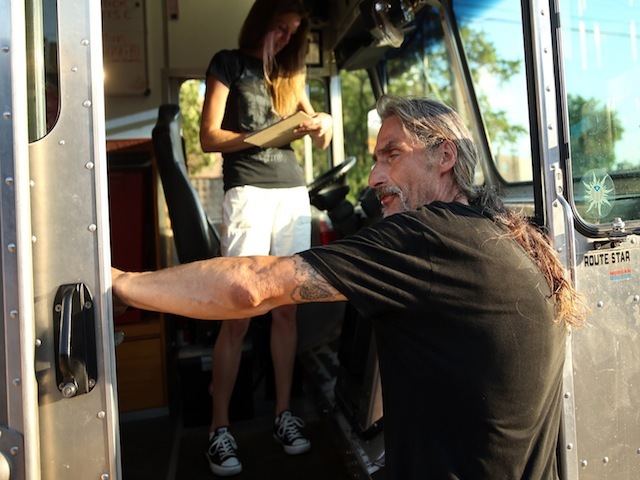 Steve Kamenicky, right, waits for Chicago Recovery Alliance volunteer Erin Scott to finish his paper work before he can get Naloxone.

When Jody Waxman heard a loud noise in her home, she thought her cats might be up to something.

“I got upstairs, I saw Alex on the floor, flat on this back with foam coming out of his mouth. I couldn’t budge him,” Waxman said.

That was last October. Waxman almost lost her son, Alex, in her home just outside of Los Angeles, to a heroin overdose.

The number of fatal heroin overdoses have risen by 50 percent between 2005 and 2012, according to Dr. Nora Volkow, director of the National Institute on Drug Abuse.

“I ran into my brother’s room, I said, ‘help me I can’t move him,’” Waxman said. Her brother started CPR while she called 911. “The paramedics arrived, and gave him Narcan to revive him. I had no idea what it was. But, sure enough two and a half minutes later, Alex stood right up.”

Narcan is a brand-name prescription drug form of naloxone. It is used most often to counteract the effects of an overdose from prescription narcotic painkillers and heroin.

“When a person overdoses on heroin, the respiratory and central nervous systems are depressed to life-threatening levels, essentially the person stops breathing,” said David Dragoo, a health expert and doctor for Money Crashers and has administered naloxone for narcotic overdoses. “Naloxone works to reverse that, by blocking the ability of heroin or pain killers to bind to the receptors in the brain and spinal cord.”

According to the Drug Abuse Warning Network, the national rate of emergency room visits involving heroin is 69 per 100,000 people. DAWN is a public health surveillance organization that monitors drug-related morbidity and mortality.

“It’s standard ER protocol to use naloxone on any patient who arrives unconscious, simply because a high percentage of those who have had an overdose,” Mohammad said. “If the patient wakes up in 10 minutes after being given Naloxone, it is evident that he had a drug overdose.”

Naloxone is on the World Health Organization’s List of Essential Medicines. The list details which medications the organization believes are the most important in a basic health system.

In the U.S., it is legal to prescribe naloxone, but laws related to the dispensation of the drug by medical professionals differ by state.

The Food and Drug Administration recently approved a new hand-held auto-injector of naloxone, similar to devices used to deliver epinephrine for people suffering allergic reactions, that are designed to be used by family members or caregivers. However, the drug can still only be obtained with a prescription written under state rules.

For Alex Waxman, a form of naloxone saved his life, and while his mother, Jody, is grateful for the paramedics having it on hand, she does not think putting naloxone in the hands of untrained health professionals or addicts is a good idea.

“If you have a heroin addict living in your house, you have to find other ways to deal with the addict,” Jody Waxman said. “Having something at home that the addict can say ‘you know what, I can use because my parents or my aunt or my sister have this medication at home that can revive me.’ I think having the product at home will not help the victim.”

A recovering heroin addict, Alex agrees with his mother. “I think it is a very, very bad idea,” he said. “It basically is going to give somebody an out. It’s telling an addict, ‘I know I can do a larger amount of heroin.’ It will open the doors for a lot of problems.”

Doctors see providing access to the naloxone to more people as a move in the right direction, to prevent overdoses.

“Addicts and their families should be given it because it saves lives,” Dr. Mohammad, said.

Dragoo said he would support non-doctors, like police, firefighters, paramedics and family members having access to it, given proper training.

“It can save a life if it’s administered in time, and there would be no need to wait for a first responder,” he said.

In a recent report published in the Annals of Internal Medicine, researchers said one death may be prevented for every 164 naloxone injection kits distributed to heroin users.

The federal government has supported a number of grants and programs to help local emergency workers and police intervene more rapidly with naloxone, which can be delivered as an injection or nasal spray, but the Obama Administration has not backed open access to the rescue drug for non-professionals.

“With the recent rise in overdose deaths across the country, it is increasingly important to prevent overdoses and make antidotes (including naloxone) available,” Michael Botticelli, acting director of the Office of National Drug Control Policy, told a congressional oversight committee April 29.

Jody Waxman said, she thinks naloxone should be left only in the care of trained medical professionals.

“It should be the first responders that have it,” she said. “The solution isn’t a prescription drug. I think it is going to meetings and going to treatment and dealing with the underlying issues that will help the addict, having the product at home will not help the addict.”

Dr. Mohammad disagrees and said he supports drug addicts and their families having access to the drug. “The drug should also be made available as a standing prescription at pharmacies convenient to where the addict lives,” he said. He also believes all doctors’ offices should have it to distribute to patients who doctors know or suspect are addicts.

“If you are using heroin and your mom has to have naloxone, it is going to prolong people from getting help,” he said. “They know mom has it, so they can get high and be OK.”

State programs
In October, the Trust for America’s Health listed 10 measures states could implement to combat prescription drug abuse. Only two states, New Mexico and Vermont, have adopted all 10 of the recommendations, which include support for naloxone use and good Samaritan or immunity laws for an individual seeking help for themselves or others experiencing an overdose.

States and local agencies across the country have initiated programs to expand
access to, and use of, naloxone for overdosing individuals given by non-trained medical professionals.

Naloxone can be injected in the muscle, vein or under the skin. It can also be sprayed into the nose. It wears off in 20 to 90 minutes and although it is is a prescription drug, it is not a controlled substance and has no abuse potential, according to an October 2013 report from Trust for America’s Health, a national health nonprofit.

According to the Center for Disease Control, CDC, at least 188 community-based overdose prevention programs now distribute naloxone. This has led to more than 10,000 overdose reversals. Expanding access to the drug has been supported by the U.S. conference of Mayors (2008 Resolution), the American Medical Association (2012 Resolution) and the American Public Health Association (APHA).

In the United States, 23 states and the District of Columbia, have Immunity laws related to prescribing and administering of overdose reverse drugs,according to the National Conference of State Legislatures, NCSL.

On April 23, a bipartisan group of 20 members of Congress wrote to FDA Commissioner Margaret Hamburg asking that her agency take prompt action to make naloxone available as an over-the-counter drug, eliminating the prescription barrier.

Sen. Ed Markey, D-Mass., recently introduced legislation that would create a federal liability shield for anyone who uses naloxone during an overdose emergency.

While some states have changed their pharmacy laws to allow the drug to be prescribed to non-professionals like family members and friends of addicts; others have passed good Samaritan laws that exempt bystanders who use the drug in an attempt to save a life from legal liability.

Quinlan Strong, a recovering drug addict and program director for a California drug treatment center, said good Samaritan laws are a step in the right direction.

“I remember when I was doing drugs with a friend and someone would overdose, we just left and prayed that they would be ok,” Strong said. “We didn’t make any calls. It would be a great idea if they could make the call and not be afraid of being charged because right now there is a great deal of fear.”

Right now 17 states and the District of Columbia have 911 criminal immunity laws, according to the NCSL. Those laws allow immunity from criminal charges or mitigation of sentencing for someone to call for help if a friend, family member or stranger is overdosing. The laws remove perceived barriers to calling 911 through the provision of limited legal protections.

Other options
Dr. Nora Volkow, director of the National Institute on Drug Abuse, told the House Energy and Commerce subcommittee on oversight and investigations that her agency is involved in research to develop “self-activated” systems.

The systems would have special sensors that could be worn by addicts and respond with a naloxone injection if it detects overdose symptoms. Volkow said her agency is also involved in research on a vaccine that would act to block the effects of heroin on the brain.

Alex Waxman has been completely sober for three months after trying for about the last year.

“It is a daily struggle right now,” Jody Waxman said. “You cry a lot; you find yourself support groups, you use the internet, you talk to other people who are in the same position as you are and you pray every single day.

“I never prayed before this, and now I pray every day hoping he will be sober another day.”

Lee Baca Retired Sheriff, County of Los Angeles
Your professionalism and hard work really were quite apparent in your work on this project.

Paul Dougherty, MD LaserVision
I feel very comfortable referring my clients to Arlene Howard PR as she gets results and always delivers what she promises.