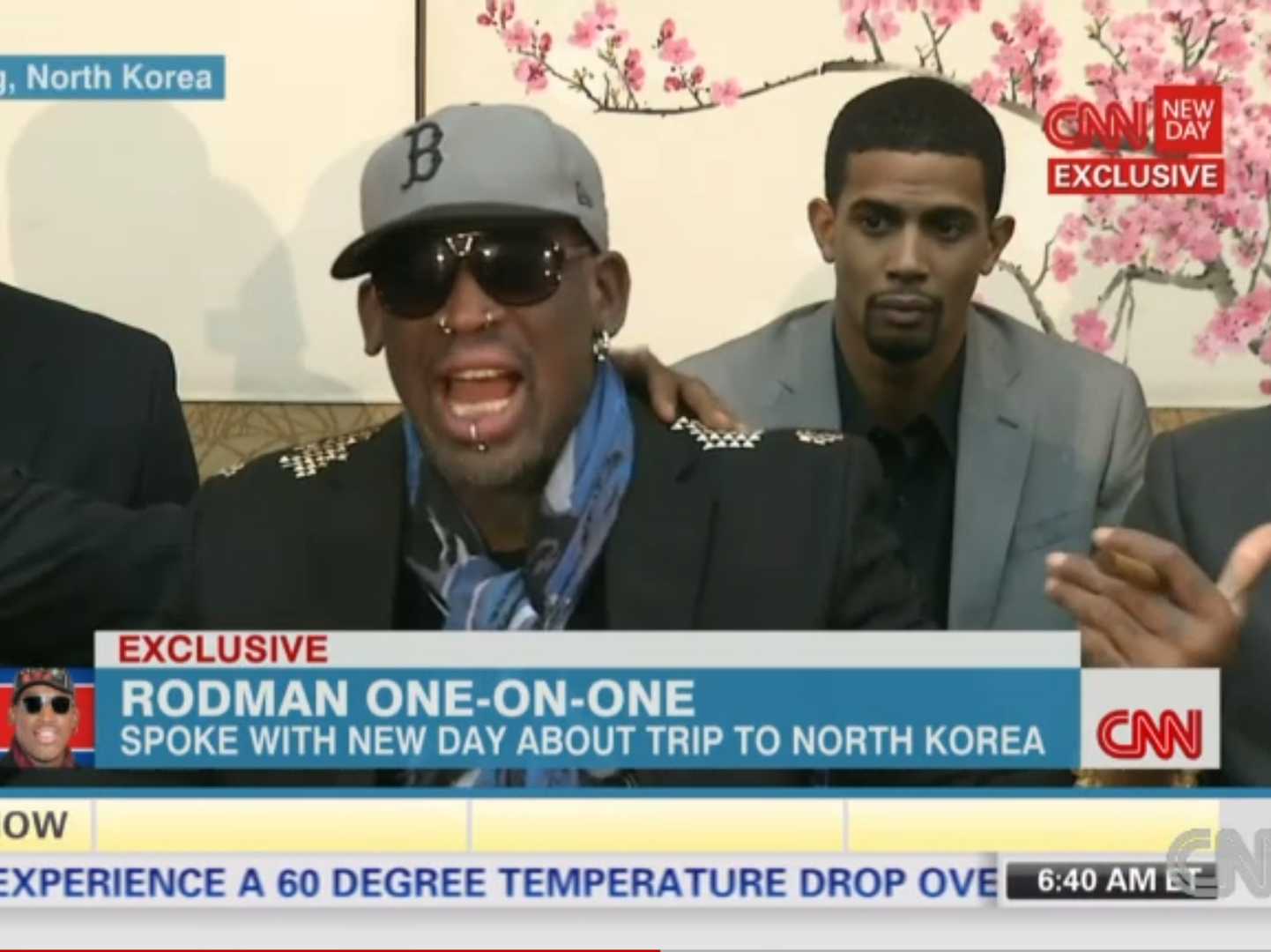 His actions in recent times, most notably his bizarre friendship with North Korean leader Kim Jong Un, have continued to dismay.

And during Dennis Rodman’s last trip to North Korea, where he led an auditorium crowd in serenading the reclusive nation’s leader with “Happy Birthday” at an exhibition game between former NBA players and a North Korean team, he caused outraged after he came close to suggesting in an expletive-littered and sometimes incoherent interview with CNN, that an American held captive in North Korea for more than a year, Kenneth Bae, was responsible for his captivity.

With Bae’s family appalled, Rodman, 52, was forced to apologize, saying he had been drinking and was under pressure as he organized an exhibition game there.

On Saturday it was revealed by his agent that upon his return to America, Rodman promptly checked into rehab to treat his long-time struggle with alcoholism.

“What was potentially a historic and monumental event turned into a nightmare for everyone concerned,” Prince said, according to The Associated Press. “Dennis Rodman came back from North Korea in pretty rough shape emotionally. The pressure that was put on him to be a combination ‘super human’ political figure and ‘fixer’ got the better of him.

“He is embarrassed, saddened and remorseful for the anger and hurt his words have caused.”

He tells CelebZter: “I’ve always been a big basketball fan and I have been watching and observing him for a long time. His bad, unpredictable and impulsive behavior always made me think that he has some kind of serious mental issues. As much as he his a good basketball player, I have always wondered if he did all these piercing, tattoos, strange hair colors for attention or publicity? Or just bad behavior ? It’s hard to tell since I’ve never treated him.

“However I can tell you that people with untreated ADHD are prone to impulsive behavior and many of them turn to drugs or alcohol ( 50% of the patients suffering from ADHD). This is the same with other psychiatric illnesses as well as they are prone to developing substance use disorder.

“It seems Rodman was admitted to a drug treatment center for his substance use disorder and I can’t stress enough that it’s also very important for him to get psychiatric and psychological evaluations to diagnose and treat whatever conditions he has, appropriately.”

Kien Vuu MD
I have known Arlene personally and professionally for over 25 years. In all that time I can say without a doubt she takes better care of her clients than any other public relations person I have known. Her communication skills are only surpassed by her persistence to get the job done – and done right. She’s the person you want on your team in a time of crisis as well as the person you want in your corner as a friend.

Lee Iacocca Author & former President of Ford Motor Company
Working with Arlene Howard PR and working with Arlene personally has been a great experience . In short she gets the job done and produces what she says she can produce !! If I had to give her a nick name I would say go-getter!! Her entire team is on the ball and don't let anything slip through the cracks !!