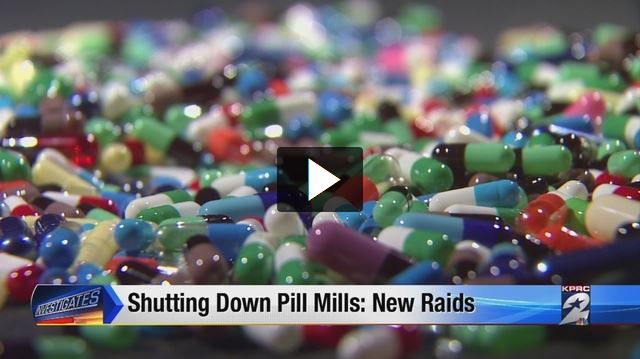 HOUSTON - As federal drug enforcement agents and Houston police continue their crackdown on pain clinics prescribing medications with few questions asked, health officials are ramping up efforts to better treat those addicted to pain pills.
In February, Channel 2 Investigates reported how so-called pill mills can impact entire neighborhoods. Since the report, the Drug Enforcement Agency has conducted raids on two more clinics, one in northwest Houston and one in Rosenberg. The area’s pill problem became national known in 2011 through something called the “Houston Cocktail.” Police said the “cocktail” was a combination of hydrocodone, alprazolam (an anti-anxiety drug) and carisoprodol (a muscle relaxant).

However, pill mills are only a small part of this problem, according to Dr. Constance Scharff, research director for Cliffside Malibu. Scharff said many people first become addicted to opioids through legitimate prescriptions from their doctor.

“Doctors need much better education in addiction treatment than what they’re getting,” said Scharff. “They don’t know how to treat it.”

This week, the Centers For Disease Control and Prevention released new guidelines for doctors prescribing opioids. The CDC is asking doctors to consider first giving patients non-narcotic pain medications. The CDC asks that if doctors do have to prescribe narcotic pain medications, then give the lowest dose possible and closely monitor the patient.

“If we get doctors trained early, if we get interventions early, we can stop most of this problem,” said Scharff.

Scharff also said many people addicted to pain medications will eventually turn to heroin, because it is cheaper and produces a similar high. However, Scharff said heroin does not produce as potent a high as prescription drugs, and users can easily overdose.

“People don’t know how to use it. They overshoot the mark. They overdose. They die,” said Scharff.

The U.S. Department of Health and Human Services reports the number of heroin related deaths jumped 39 percent between 2012 and 2013.

This week, the Department of Health and Human Services awarded $94 million to clinics across the country specializing in the treatment of opioid addiction. Houston Area Community Services received $325,000. Clinics in Port Arthur, El Paso and Cotulla also received grants.

The Senate also recently passed a bill calling on the federal government to come up with set standards on how pain medications are prescribed. The measure has yet to pass the House.

Akikur Mohammad M.D., CEO, Inspire Malibu
Arlene's communication skills are only surpassed by her persistence to get the job done-and done right. She's the person you want on your team.

Lee Iacocca Business Icon
I am a board certified plastic surgeon in Beverly Hills and have worked with no less than 4 different PR companies prior to working with Arlene and her team.  I had worked with large as well as small boutique firms.  At the end they were all the same. They promise you the world and then are nowhere to be found.  Arlene and her team not only have done what we intended but so much more.  Arlene is tenacious, persistent and tireless and will do what it takes to get the job done.  I recommend her with confidence and pleasure.