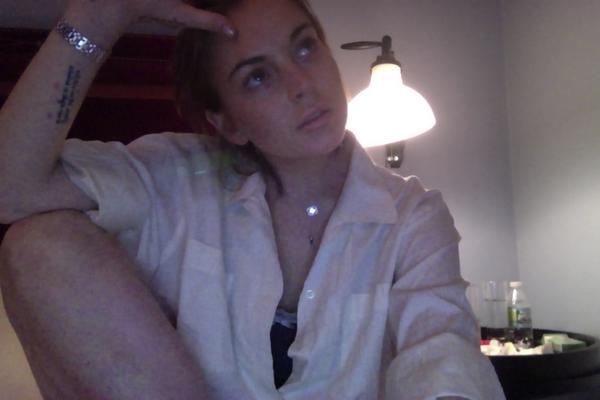 She’s back in a place she knows well — Betty Ford Center.

The Betty Ford Center is the same place the 26-year-old sought help in 2010 and famously made headlines when an employee went public with claims the actress was “out of control” and had alcohol on her breath during a tussle between them. A police investigation followed.

Lohan ended up in Betty Ford after rehiring lawyer Shawn Holley and firing her previous one, Mark Heller.

The troubled starlet apparently begged Holley to return, and the lawyer, who appears to be a glutton for punishment, agreed and worked “all night” to get the actress into Betty Ford, sources told the Daily News.

“I just found out she’s okay,” dad Michael Lohan said. “According to the judge and the city attorney’s orders, Lindsay has checked into rehab. I will not and can not disclose where, but it was no thanks to Mark Heller.”

The Mean Girls star was said to still be planning to check into Morningside late Thursday, her father said.

But another source told the newspaper that a member of Lohan’s entourage was making last-minute demands late Thursday — regarding guests and cell phone usage — that further jeopardized her ability to formally enroll.

Morningside does not allow guests in patient rooms or the use of cell phones.

Meanwhile, a leading Addiction Specialist, says that Lindsay’s behavior in the past 24 hours suggests she still has a sense of entitlement.

Dr. Damon Raskin, who is a double certified internist and an Addiction Specialist and treats patients at Cliffside Malibu Treatment Center, tells CelebZter: “This is basically another example of Lindsay acting out and of her feeling very entitled. This is also about control As a celebrity child actor myself I was privy of seeing these kids not being in control of their lives, they were being told what to do, how to act, what to wear by parents and managers and agents and producers, etc. and now Lindsay, like most child actors who grew up that way, is acting out trying to get a sense of control.

“She is trying to get back control from authority which could and will lead to further consequences. By Lindsay putting herself in consequence of going back to jail she is still not at the point where she is ready for help.”

And on the subject of Lindsay and smoking in rehab, he says: “A lot of my patients, even after they quit other addictions can’t control their smoking addiction. Some patients actually pick up smoking while in rehab pick up or increase their smoking. Smoking is another crutch, another stimulant. It is clearly another addiction, probably one of the worst ones in terms of long term health dangers. It is also one of the hardest addictions to give up. Giving up smoking is harder than giving up heroin for some people.”

Donna Harrington Founder/CEO of Furry Angel Foundation
I’ve worked with Arlene Howard for years. In the fast-paced, cut-throat world of live morning television, Arlene stood out among the hundreds of publicists emailing and calling in pitches to me. Why? Because she does not pitch generically. She knows her client, she knows her media outlet and she sends pitches that are personally crafted. I am in awe of her energy, perseverance, persistence and genuine love of helping clients get the exposure they deserve. She is a creative mind and always brainstorming who and how to put her clients on the map. Any business looking for an A+ publicist would be lucky to get Arlene and her team behind them.

Nicole Prentice Williams President, Prentice Williams Media
“I’m impressed with how quickly the AHPR team was able to deliver, and how little time and effort was required of me. The secret to their success is their team approach. Imagine what one seasoned, highly creative publicist with great media contacts can do for your PR campaign. Now multiply that by seven.”