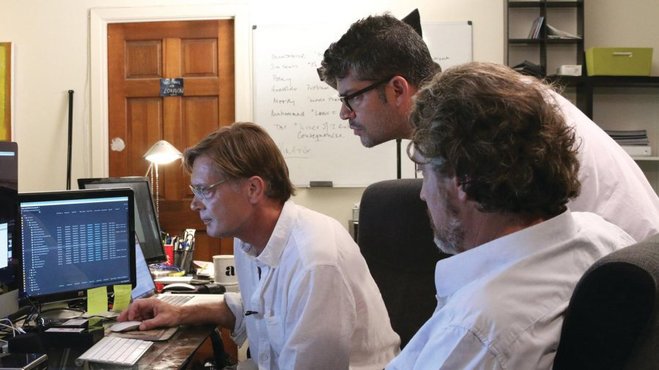 After Robin Alley watched the movie “Vaxxed: From Cover-Up to Catastrophe,” one of her first thoughts was how to get it to play in her hometown.

The movie had been abruptly pulled from the 2016 Tribeca Film Festival lineup, and she was worried it might not make it to Knoxville.

So Alley and another friend began a Facebook group for like-minded individuals who wanted to make sure the film was shown locally. They called small, independent theaters, hoping for two screenings over a weekend.

By the time Knoxville-based Regal Cinemas scheduled the movie for a one-week run in two Florida cities, the “Bring Vaxxed to Knoxville” group had more than 900 members, several of whom devoted themselves to promoting their effort through tweets, posters, T-shirts and phone calls to local health practitioners. Many group members who live outside Knoxville said they will travel to see the movie when it opens Friday at Downtown West Cinema 8, where it will play through June 30. Regal, which is screening the film in at least two other cities, did not return multiple calls for comments on its decision to show the movie in Knoxville.

“I think everyone thinks of this as an anti-vaccination film,” Alley said. “It’s not. It’s basically advocating for informed consent, parental rights and more research for safer vaccines.”

The film, released April 1, deals primarily with one vaccine: the combination measles-mumps-rubella immunization that federal health officials recommend children receive at ages 12-15 months and 4-6 years. At its crux is a claim that a senior scientist with the national Centers for Disease Control and Prevention — William Thompson, who doesn’t appear in the film except through short excerpts from telephone conversations he said in 2014 were recorded without his knowledge — provided environmental scientist Dr. Brian Hooker with 2004 data that showed a possibility black male babies who received the MMR within a certain age range were at higher risk for autism.

“Vaxxed” carries the tag line “The Most Controversial Film in America,” not only for the topic but because it’s directed by Dr. Andrew Wakefield, a British gastroenterologist whose 1998 research among a small sample of autistic children purported a link between the MMR and autism and bowel disease. Wakefield, who was stripped of his credentials after a 2014 study deemed his research fraudulent, appears throughout the film, as does producer Del Bigtree, who also produced the television show “The Doctors” (two of whom appear in the film).

Though several studies since have refuted Wakefield’s position, it was enough to make Alley and other parents think twice about childhood immunizations. In the movie, Wakefield said children should be given three separate vaccines for measles, mumps and rubella. But Alley said she’s troubled by the contents of all vaccines and possible side effects as well as what she fears are relationships between the CDC and the pharmaceutical industry — another theme of the film, which also features multiple families with autistic children.

“It’s such a polarizing topic,” said Ruth Shelton, a local mother who chooses not to vaccinate and will see “Vaxxed” on its opening night here. “Why is this so controversial? It piques my curiosity. It doesn’t mean I am going to agree with everything in it, but I want to know why people are so passionate about it.”

The CDC said in 2014 that further study found the 2004 data was skewed because the group of children studied included many who were in early intervention programs specifically because they had been diagnosed with autism. But the movie alleges a cover-up and calls on the public to demand a Congressional hearing.

Regardless, “the CDC is not the only source of information,” said Dr. Martha Buchanan, Knox County Health Department director. “Hundreds of other reputable medical journals have done studies and not been able to demonstrate a connection between vaccinations and autism.”

Buchanan said that although up to 10 deaths have been linked to measles over the last decade in the United States, which has seen several recent outbreaks, the disease can also cause deafness, blindness or permanent disability. Mumps can cause sterility in males; rubella is particularly dangerous to pregnant women because of the risk of miscarriage or birth defects. And many diseases can be death sentences for those with compromised immune systems who cannot be vaccinated, she said.

“Vaccinations are one of our best success stories,” all but eliminating harmful diseases in developed countries, she said. “I want parents to make informed decisions for their kids. … Obviously, we think vaccination is the right decision.”

Buchanan hopes the film will provide an opening for physicians to ask parents about their vaccine concerns.

“What we hear from people is that they want to talk about it, they want to get answers, but they don’t feel like their provider really takes the time to answer their questions,” she said.

Alley, whose children see a doctor only when seriously ill, said the film “solidified her decision” not to vaccinate. But she thinks MMR research should be ongoing.

“Science is never settled,” she said, “or else we never improve.”

Rebecca Brooks Co-Founder: Alter Agents
I am a board certified plastic surgeon in Beverly Hills and have worked with no less than 4 different PR companies prior to working with Arlene and her team.  I had worked with large as well as small boutique firms.  At the end they were all the same. They promise you the world and then are nowhere to be found.  Arlene and her team not only have done what we intended but so much more.  Arlene is tenacious, persistent and tireless and will do what it takes to get the job done.  I recommend her with confidence and pleasure.