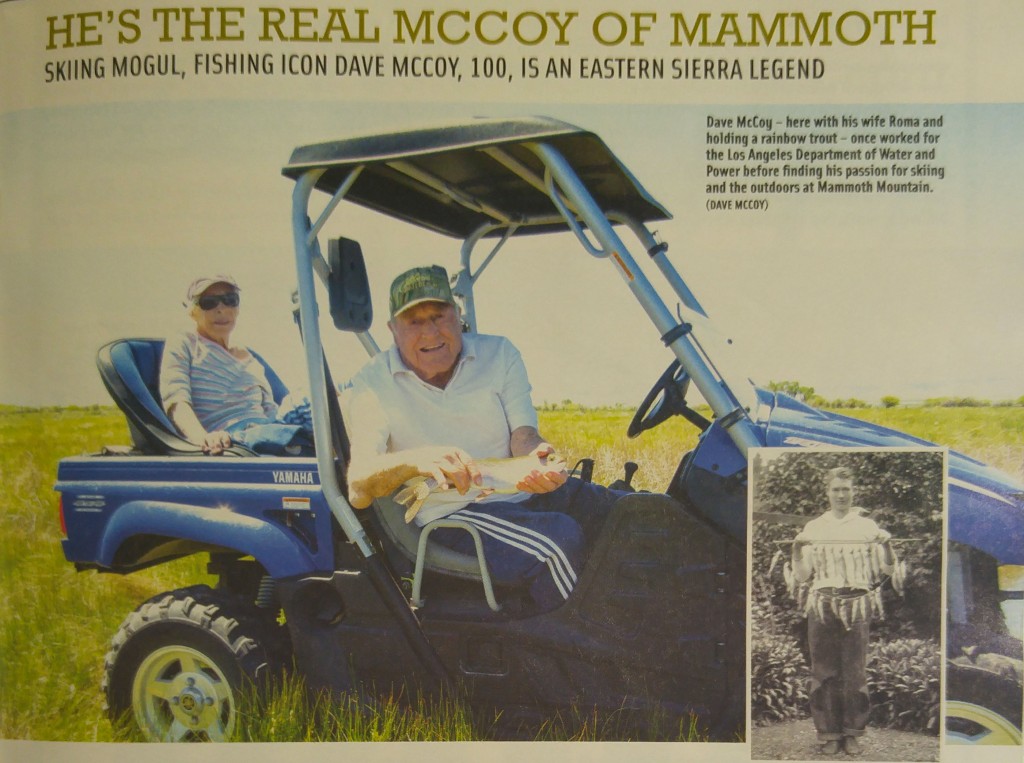 The following appears in the October issue of California Sportsman:

If you’ve skied Mammoth Mountain, have spent time there or know the comings and goings in nearby Bishop, you probably know the name Dave McCoy.

How influential in the Eastern Sierra is McCoy, who founded the Mammoth Mountain Ski Resort and opened its runs in the early 1950s? Sports Illustrated penned a 5,739-word profile of McCoy in its Feb. 26, 1985 issue. That story ran over 30 years ago, and on Aug. 24 McCoy celebrated his 100th birthday (his wife, Roma, turned 95 on Aug. 12).

McCoy owned the resort, which became an immensely popular winter playground for Southern California ski bums and bunnies, for 50 years before selling the business in 2005 (after also coaching several U.S. Olympic skiers). He remains a celebrity on Mammoth and at his home down the mountain in Bishop.

He doesn’t fish as much as he used to, but you can find he and Roma riding a custom-built ATV around the local trails, and his love of photography is on display through his company, Dave McCoy Photography (davemccoyphoto.com).

“I love taking photographs while out exploring remote areas on one of my electric Rhinos,” he says. “There’s a picture everywhere you look around here.”

He was also the driving force behind the Mammoth Lakes Foundation, a youth program that helps Mono County students get to college.

We caught up with McCoy to discuss his adventure-filled 100 years and what’s next for him. Chris Cocoles What did you enjoy best about your 100th birthday celebration?

Dave McCoy Getting to see all the family all at once, and boy, it was great. There were even a few first-time acquaintances.

CC Where did your passion for skiing come from?

DM I actually grew up in Washington, as well as on the road with my father as he built highways along the West Coast. I came to be excited about skiing up there when we’d make our own skis out of wood and ski the tailings of a coal mine. Then I came down to the Eastern Sierras and started snow surveying, which turned skiing into a career, you might say.

CC You’ve spent so many years in and around Mammoth now. Tell me how special your home has become for you?

DM We actually live in Bishop, 45 minutes south of Mammoth. There were only three couples living in Mammoth when we started there. One was taking care of winter cabins. Another had dog sleds to haul materials to a local mine, and the other had the local tavern. There wasn’t much going on here. Occasionally we’d get Hollywood movie stars coming in to make films and other people dropped in, but it was a quiet place.
CC How great does it feel that you built such a wonderful and popular ski resort at Mammoth after all the hard work you’ve put in?

DM I didn’t do really hard work; I had lots of fun. It feels great looking back after all these years, but we were really just having fun.

CC How much fishing have you done over the years and do you still fish a lot?

DM I don’t fish too much any more these days, but I used to tie flies to make money to get to school. I had an extremely great fishing rod when I got down to Independence. It was a Heddon Life-Pal. It was a metal rod that was much better than anything I’ve ever had. It looked like a bamboo rod – slim and trim and very sensitive. It was light and strong and I could cast 33 yards. I used to put tin-can lids out in the driveway in the back of the restaurant I worked in to hone my casting aim. I used to go out and fish every time I had a chance. The Kearsarge area in the mountains above Independence was my main fishing area at that time.
CC When you first started dating your wife, Roma, she told you she liked to dance and you told her you liked to fish. Did both of you eventually grew to like dancing and fishing?

DM Yes … and skiing. Roma never got too excited about fishing, but she loved to hike, she loved the country and she loved coming along. There used to be great Saturday evening dance parties at Keough’s – south of Bishop – and everybody from the Owens Valley would meet up there to dance. I wouldn’t say I was a good dancer, but I had fun. CC I get the sense that you kept so busy and are such a tireless worker, was fishing sometimes too slow for your motor? Or did you love casting for trout right in the high country?

DM I loved fly fishing in the high country; it was never too slow for me. I loved to fish and I loved to tie flies, and that’s all I ever used.

CC I love the fishing ad you shot on the San Joaquin River for 76 (gasoline stations), which you chose to post as your Facebook profile photo. What was that experience like?

DM It was just my reputation for being a fisherman; the guys who ran a commercial advertising firm were into skiing and they knew about my fishing capabilities, so we teamed up. It was an easy gig; I was used to doing things like that.

CC During your time skiing on the mountain and making a home in the Eastern Sierra, have you thought about the possibility of Mammoth erupting, given the active volcano zone that surrounds the area? Or does everyone there simply embrace it like many Californians do with their attitude toward earthquakes?

DM We never worry about that. I didn’t develop the habit of worrying. There should be plenty of signs telling us that something is coming before a volcano hits.

CC During your time skiing on the mountain and making a home in the Eastern Sierra, have you thought about the possibility of Mammoth erupting, given the active volcano zone that surrounds the area? Or does everyone there simply embrace it like many Californians do with their attitude toward earthquakes?

DM We never worry about that. I didn’t develop the habit of worrying. There should be plenty of signs telling us that something is coming before a volcano hits. CC You love photography and shooting some of the majestic wildlife of the Sierras. Can you share one of your memorable moments? CC Your Mammoth Lakes Foundation has done so much for the community and in awarding scholarships to students. What does that mean to you?

DM When we started the Mammoth Lakes Foundation in the late 1980s we had no students, but a lot of locals who could not go away for higher education. I helped the local college build classrooms in a shopping center where I first got started.  Today we have around 500 students taking college classes between Bishop and Mammoth. We have two college centers that are part of Cerro Coso Community College and the Kern Community College District.  Many of our local students are now working in the community, and many have gone on to four-year colleges and universities. CC What do you are most looking forward to you as you head towards your 101st birthday next year?

DM I want to do everything I’ve been doing the last few years, but I want to do it better. Some examples would be our electric vehicle conversion of a gas-powered, side-by-side (off-highway vehicle). We’ve been working on perfecting this for several years, but battery power is always changing and we can always do better. We also want to make sure that – every day – we’re just having fun. Every day – more fun. CS

Rebecca Brooks Co-Founder: Alter Agents
Arlene Howard is one of the best, if not the best, in her field. She has been in the business for a long time, which means she's very well connected and knows all the ins and outs. She doesn't accept anyone that just walks into her office, but when and if you are fortunate enough to be her client, she will love you and she will fight for you. Can't be more grateful to work with Arlene.

Kien Vuu MD
Arlene's communication skills are only surpassed by her persistence to get the job done-and done right. She's the person you want on your team.