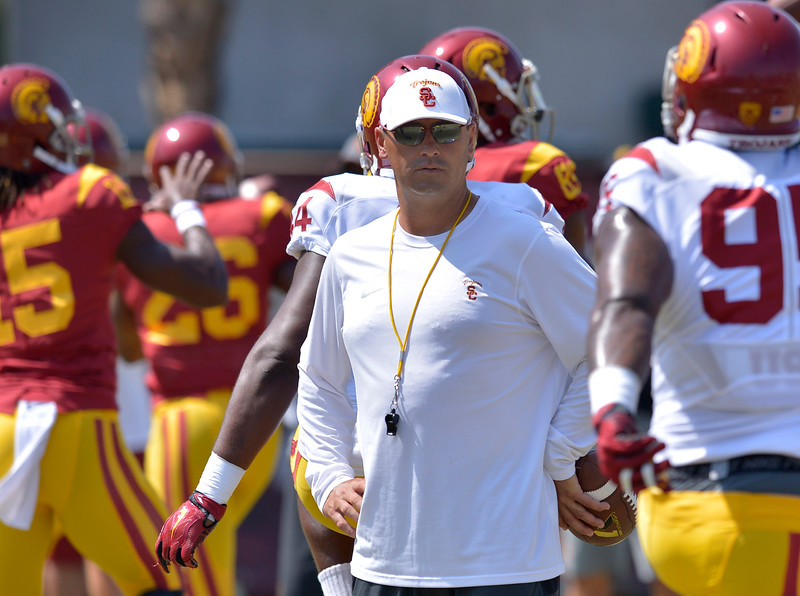 In a stunning and rapid turn of events, USC coach Steve Sarkisian was fired Monday, just one day after appearing intoxicated at a team meeting and missing practice and just hours after he was placed on indefinite leave.

The announcement by Athletic Director Pat Haden followed revelations of more than a dozen alcohol-related incidents involving the second-year coach, including routine excessive drinking after games.

Haden himself has come under fire for failing to act more decisively after Sarkisian was intoxicated at the school’s annual Salute to Troy preseason dinner in August, embarrassing the program and the school with a profanity-laced, party-boy pep talk before thousands of boosters. Video of that incident went viral on the Internet and was broadcast repeatedly on national television.

Sarkisian later apologized and said he mixed alcohol and medication.

“[Haden] has zero value as an athletic director,” former USC player and radio host Petros Papadakis said. “What can his value be after this? This is incredibly embarrassing for USC. I’m shocked and blown away there was a power structure at USC that left Sarkisian in charge.

“It is,” Papadakis said, “mind boggling.”

The Torrance-born Sarkisian, 41, who was a star at West High School in his hometown before playing collegiately at El Camino College and later at powerhouse Brigham Young University, was scheduled to enter a treatment center Monday, according to sources.

Sunday was the latest incident witnessed by USC coaches and players. Sources that included a USC assistant coach said they believe Sarkisian was drunk during USC’s 42-14 victory over Arizona State on Sept. 26.

“In the locker room, he was too animated and had bloodshot eyes,” the coach said.

Another source said Sarkisian tried to huddle the players on the sideline but was pulled away by assistant coaches who believed he was not sober.

When USC flew back from Washington State in 2014, Sarkisian went to the back of the plane and passed out after drinking, an assistant coach said. Another coach said Sarkisian consumed a large amount of Patrón Tequila in the Coliseum locker room after the Trojans defeated Notre Dame, 49-14, last year.

Additional media reports have chronicled issues at Sarkisian’s prior employer, the University of Washington, where he was head coach from 2009 to 2013 and compiled a 34-29 record. He had two prior stints at USC as an assistant coach among other coaching positions.

Haden appointed offensive coordinator Clay Helton as interim coach after learning Sarkisian was not in condition to work on Sunday. It was the second time Helton, 43, has held that role. He did so after Ed Ogeron, himself an interim coach in place of the dismissed Lane Kiffin, resigned upon Sarkisian’s hiring.

“After careful consideration of what is in the best interest of the university and our student-athletes, I have made the decision to terminate Steve Sarkisian, effective immediately,” Haden said in a statement. “I want to thank Clay Helton for stepping into the interim head coach role, and I want to add how proud I am of our coaching staff and players and the way they are responding to this difficult situation.

“Through all of this we remain concerned for Steve and hope that it will give him the opportunity to focus on his personal well-being.”

Haden spoke with Texas A&M coach Kevin Sumlin and Penn State coach James Franklin two years ago. They are currently a combined 10-1 overall. Some donors will also push for Orgeron, now an LSU assistant coach who coached the Trojans after Kiffin was fired in 2013.

Ex-USC coach Pete Carroll recommended Sarkisian, his former assistant at USC, for the Trojans’ top job. He said he would continue to support Sarkisian in his recovery.

“It’s been hard on him,” Carroll said on Monday, “and it’s been hard on the people around him too, and he knows that. He’s got to take the steps to take care of business now.”

Richard Taite, the CEO and founder of Cliffside Malibu treatment center, said he believed Haden did not act improperly in August, instead focusing on Sarkisian’s ownership of his health.

“The reason that it didn’t work out is very simple,” Taite said. “The second chance would have worked if Sarkisian said, ‘I have a problem with drugs and alcohol.’ [Instead] he said, ‘I don’t have an alcohol problem. It was simply a mixture of alcohol and medication.’

“That’s an excuse,” Taite said. “This was doomed to failure. When you don’t take responsibility for your actions, making excuses for your behavior, how are you supposed to get the help you need when you’re in denial?”

Sarkisian’s salary has remained private, but he was scheduled to make $2.85  million this season had he stayed at Washington.

Lee Iacocca Author & former President of Ford Motor Company
“One of the best business decisions I have made was hiring AHPR as my PR/publicity representatives. They deliver what they promise and beyond and are diligent in their work efforts. Their entire team works on behalf of THE HILLS with great enthusiasm and continuous hi-end media results. She's the best PR woman I've ever had. Couldn’t be happier!!!”

Howard Samuels Founder & CEO THE HILLS TREATMENT CENTER
It seems the Arlene Howard team is always searching for that next opportunity that presents in the media. I have been surprised to be contacted by Arlene or her staff on weekends, or later in the evening when something exciting is about to happen. Arlene’s personal relationships and attention to detail has provided our practice with opportunities that have added to our cache in the field of plastic surgery throughout the world. Arlene’s service has, even in these tough economic times, added to my bottom line. The media hits she's orchestrated have allowed me to enhance my website with videos from a list of television shows that gives my practice a competitive edge, along with prestige and future opportunity.