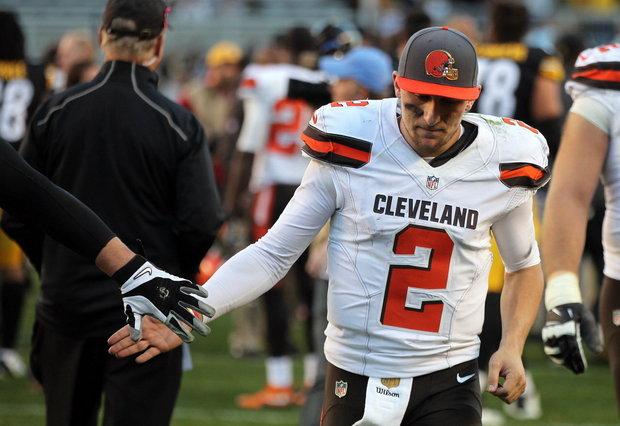 CLEVELAND, Ohio — It’s Johnny Manziel’s self-proclaimed first day of sobriety, but an addiction expert says he has ‘zero chance’ of staying sober without top-notch treatment, and laments the fact that Manziel’s father publicly shamed him.

“Anybody can get sober,” Richard Taite, founder and CEO of Cliffside Malibu treatment center and co-author of Ending Addiction for Good told cleveland.com. “But he has less than a zero chance of staying sober (without quality treatment). I have a better chance of winning the lottery, and I don’t buy lottery tickets, than him getting and staying sober.”

He said Manziel, who was suspended four games by the NFL Thursday for violating its substance abuse policy, can’t stay clean without top-quality treatment “because he doesn’t have the tools to stay sober. He’s never given himself the opportunity to learn the tools.”

Taite, who hasn’t treated Manziel, has plenty of experience with professional athletes and other celebrities. In fact, Manziel’s good buddy Josh Gordon spent less than two weeks at Cliffside Malibu in 2014, but left in part because he did not believe he was an addict.

Manziel spent 73 days at the Caron Addiction Treatment Center in Pennsylvania last off-season, but was photographed out and about with alcohol not long after he was discharged in April and re-joined the Browns.

“It appears as though (Manziel) is narcissistic to the extreme and is not capable of putting others before himself, let alone an entire organization, which is what he needed to do,” said Taite. “He’s got significant trauma. How do I know this? I don’t treat him, but his father has shamed him in the public.”

Taite was referring to Paul Manziel telling ESPN last week that ‘my son is a druggie and I hope he goes to jail.’ He also said, ‘if I have to bury him, I’ll bury him. That’s the fact. So if not, if he calls me and needs help, I’ll go get him. Until then, he’s on his own. I’ve done everything I can do. There is nothing [else] I can do as a father. Nothing…. It is, what it is. He’s a druggie and everybody needs to accept it.”

Taite said it was evident how much the remarks bothered Manziel, who included ‘hi dad’ In an Instagram post from what was supposedly his last hurrah in Cabo San Lucas, Mexico this week.

“His father put his need to look like a tough-love guy ahead of the needs of his child who is crying out for help,” said Taite. “How do you think that affects his child? His child is traumatized over it.”

Taite, a former addict, said in his judgment, Manziel is self-medicating in part because he felt like a failure in the NFL.

“Look at him. His name was Johnny Football. He was so exciting to watch and he drank his own Kool-Aid,” said Taite. “He was on the mountaintop and now he’s a joke, a punchline. And now to add insult to injury. The man who is supposed to love you more and protect you more than anyone else on the face of the earth is publicly shaming you so he can look like a tough guy and a good parent.”

In his estimation, ‘this guys needs no less than 90 days in treatment. That means he’d go through all through July, August and September, which means this year is gone.”

Taite said if Manziel gets the right evidence-based, science-based treatment “he would put himself in a tremendous position to go back and thrive in the NFL. Without doing that, he has no chance. None.”

He said Manziel expressed horrible judgment on the Cabo trip where one of the 20 people staying the oceanfront luxury home posted a picture holding what appeared to be multiple bags of drugs.

“And the only thing he’s got to say about that is ‘it’s not mine,”’ said Taite. “Why are those people around you? This is a kid that gets a bad idea in the middle of a bad idea because he doesn’t have the direction or the support he needs.”

Taite said Manziel, who was dumped by two agents this off-season, needs to learn how to deal with the rough times that will come in the NFL if he gets back in.

“Let’s say he can’t get an agent or he can’t get a tryout with a team,” said Taite. “The second he starts falling on hard times, because he doesn’t have the tools to go through a difficult time, he has to self-medicate. It’s the only way he can survive.”

Taite said Manziel currently appears to be in denial and “he’d only be going in at this point to get the heat off. That’s still great news, because the goal there is to get him to make a shift. Top-notch treatment centers will move you through the stages of change so that way there’s no relapse. Every time you move through a stage, it fills up with cement (so there’s no going back).”

He added, “the thing that’s killed more alcoholics and more people addicted to drugs is ‘he’s got to hit rock bottom.’ That’s not true. Not in 2016. So we do want him, no matter what stage he’s in, to go to a top-notch treatment center.”

He said Manziel needs to “repair the old injuries that are causing him to self-medicate in the first place” and if he checks into rehab soon “that would be the first good judgment he’s made and I would commend that.”

H.F. Boeckmann II
"I had spent an evening with a prospective client at a conference in Florida. We'd had dinner and discussed the possibility of a year-long contract. During my follow up call with him the next week, he mentioned that on his flight home, he saw my photo and comments in an article in the Alaska Airlines magazine. Jokingly, he said he had no idea he was dining with such a big shot. The press that Arlene Howard PR has generated for my small company in just the span of six months is far beyond our wildest expectations."

Rebecca Brooks Co-Founder: Alter Agents
In the more than 25 years I have worked with Arlene Howard, she has always been a consummate professional. When you work with Arlene, you know you are getting the best. Her word is your bond, and she has a dedication to her clients that is unparalleled.