If, as a photographer, you discover somebody stealing your photo and using it for their own purposes, there’s plenty you can do.

You can send a DMCA (Digital Millennium Copyright Act) takedown that criminalizes the dissemination of copyrighted material, or you could get Pixsy–a website that gives “photographers and independent creatives an opportunity to stand up for themselves”–to send an invoice to the person who helped himself to your photograph without acquiring permission and then threaten legal action.

But when the Islamic State steals your photo, manipulates the image to suit their needs, and then disseminates it as propaganda, there’s probably not much you can do. And that’s where Brian McCarty finds himself.

In 2012, McCarty shot the following photograph in Gaza as part of his WAR-TOYS Project, a “photo essay exploring war from the perspective of the children who face it every day.” 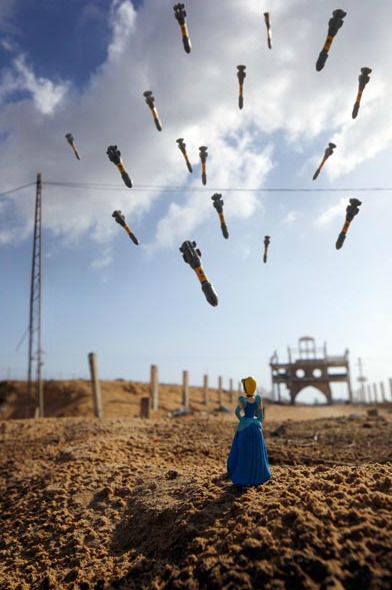 But then McCarty saw the altered version below, with the Cinderella doll replaced with an ISIS flag, and after he posted the new image on Facebook, his friends who speak Arabic told him that it was, in fact, ISIS propaganda. 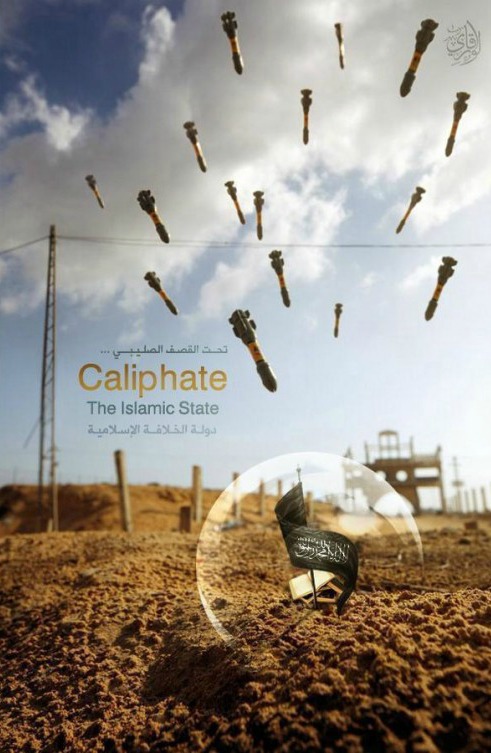 “I’m not happy about [commercial theft], but I’ve had to get pretty thick-skinned,” McCarty told Hyperallergic. “The ISIS theft is something completely different and far more disturbing.”

McCarthy has been working on his essay for the past four years, and he says it’s “about articulating children’s experiences of war.” The Cinderella photo was based on the drawing of a girl from Gaza that showed war descending upon a crying child. As noted by Hyperallergic, the ISIS black flag is protecting an open Koran inside a bubble, and the propaganda text reads, “Even if war destroys everything, the Islamic sign and state is protected and will never fall down.”

Most of ISIS’s usage of his image traces to August 2014, when McCarty says it started spreading through extremist-linked Twitter feeds. When he first saw it, he contacted Pixsy founder Daniel Foster, who consulted a friend with a background in international law about what could be done. “They agreed that there were some legal options in international courts, but any victory would be symbolic,” he says. “I could never accept any money from a terrorist organization, even if I used every dime of it to fund art therapy programs for refugees around the world.”

In a blog post on Pixsy, Foster also explained that he was able to successful send off several DMCA takedowns that got the image removed from sites like Twitter and Blogspot. “These sites quickly responded to our requests and removed the photo,” he wrote.
But still, ISIS’s act of theft was disheartening for McCarty.

“They took a little girl’s very real fear of war and turned it into something promoting extremist beliefs–ones at the core of unspeakable amounts of death and suffering,” he said.

Deland Jessop Founding Partner - PolicePrep
Arlene and her team are a no nonsense, hardworking, leave-no-stoneunturned bunch. They do it all, and at warp speed. No baloney or false promises, just results, guaranteed to get your phone ringing o the hook, re you are prepared for it, definitely beyond your wildest dreams.

Thom E Lobe, MD Founder, Beneveda Medical Group
It seems the Arlene Howard team is always searching for that next opportunity that presents in the media. I have been surprised to be contacted by Arlene or her staff on weekends, or later in the evening when something exciting is about to happen. Arlene’s personal relationships and attention to detail has provided our practice with opportunities that have added to our cache in the field of plastic surgery throughout the world. Arlene’s service has, even in these tough economic times, added to my bottom line. The media hits she's orchestrated have allowed me to enhance my website with videos from a list of television shows that gives my practice a competitive edge, along with prestige and future opportunity.