Sofia Vergara, Christina Hendricks, Kim Kardashian, Shakira, Jennifer Lopez, Beyonce… What do these women have in common? Curves in all of the right places, including the derriere. These days, a bodacious bottom is no longer disdained – rather, “junk in the trunk” can be seen on red carpets everywhere, coveted by women and desired by men worldwide.

Constantino Mendieta, M.D., (http://www.constantinomendieta.com), a board-certified Miami-based plastic surgeon specializing in butt reshaping, points to statistics from the American Society for Aesthetic Plastic Surgery which show that buttock augmentation surgery demand grew by almost 40% from 2008 to 2009 alone, and it has grown so precipitously since 1997 that figures for the early year are not even available.

To achieve the most beauteous bottom, Dr. Mendieta has crafted the “Thong Lift,” a revolutionary procedure to reshape and rejuvenate the derriere by adding volume using a patient’s fat and lifting the buttocks from a well hidden buttock crack. This new procedure is the first of its kind to eliminate the visible scars inherent in traditional buttock lifts. The scar is out of sight, located where a thong panty string would rest, giving the patient the best seat in the house. 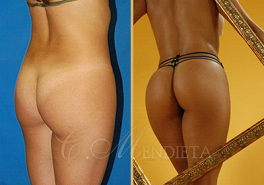 As curvier physiques continue to make a comeback, Dr. Mendieta says that butt reshaping is already the most frequently requested procedure in his practice. While breast implants, liposuction and cosmetic injectables are de rigueur, Mendieta believes that such will become the case with butt augmentation starting with the New Year, when many women are looking to improve upon their overall self-image and appearance.

Years ago it seemed buttock augmentation was a “fad” precipitated by the meteoric rise of J Lo and Beyonce. Now, though, the continuing emphasis on this aspect of attractiveness, including the rise of new icons like Kim Kardashian, show that odalisque beauty may be here to stay.

Gone are the days of the emaciated stick figure. Back are the days of the celebrated hourglass figure, replete with a voluptuous rear-end. Prominent, perky, youthful bottoms create a sensual profile and seductive silhouette.  2011 will definitely be all about picking up the rear if Dr. Mendieta has a say in the matter.

Lee Iacocca Business Icon
I’ve worked with Arlene Howard for years. In the fast-paced, cut-throat world of live morning television, Arlene stood out among the hundreds of publicists emailing and calling in pitches to me. Why? Because she does not pitch generically. She knows her client, she knows her media outlet and she sends pitches that are personally crafted. I am in awe of her energy, perseverance, persistence and genuine love of helping clients get the exposure they deserve. She is a creative mind and always brainstorming who and how to put her clients on the map. Any business looking for an A+ publicist would be lucky to get Arlene and her team behind them.