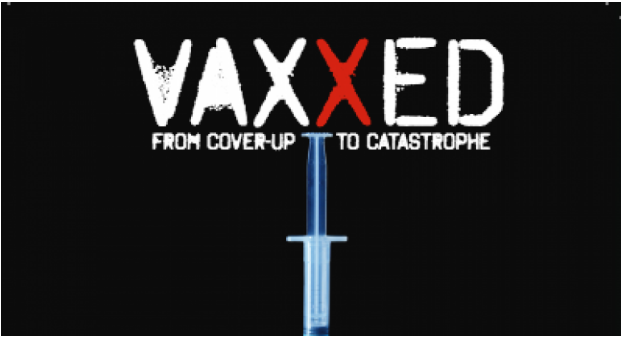 “Vaxxed” is not an anti-vaccine movie, so don’t dismiss this film without seeing it. Willful ignorance is never a good thing. We’ve had far too much of it in the vaccine debate already.

“Vaxxed” is a pro-safe vaccine movie. It is a listen-to-the-parents-of-children-who-have-been- harmed movie. It is a compelling documentary exposing a high level of corruption and fraud within the Centers for Disease Control and Prevention (CDC). It also explores the insidious reach of the pharmaceutical industry into our lives and the devastation that that unholy alliance between the CDC and pharmaceutical industry has caused in human lives. Most importantly, it warns of the catastrophic future we are facing if we don’t wake up and act soon.

It doesn’t matter which side of the vaccine debate you are on. This movie carries voices that must be heard.

From the producer’s statement:

From the moment I started working on this movie people have asked why I would choose to leave my career as a respected producer on the medical talk show, The Doctors, to make a movie with Dr. Andrew Wakefield, arguably the most controversial figure in modern medicine. The answer is I had no choice.

“Vaccines are safe.” That is the stated fact from a highly vocal subset of the medical community, everyone who worked around me on The Doctors, and just about any person you stop on the street. But in the fall of 2014 everything changed when I was alerted that a senior scientist from the Centers for Disease Control and Prevention (CDC) had become a whistleblower and had confessed on the internet that he and five of his colleagues had committed fraud on their 2004 Measles, Mumps, and Rubella (MMR) vaccine study when they covered-up the fact that the vaccine was causally associated with autism.

More shocking than the accusation that a U.S. government agency was knowingly poisoning millions of its own children with a flawed vaccine was the fact that not a single mainstream newspaper, television or radio show covered the story.” Del Bigtree, Producer, Mediacal Journalist

Paul Turek MD, FACS, FRSM Director, The Turek Clinics
Biodent is thrilled with Arlene Howard PR representation. We made the selection of this firm based on their good work with our colleagues and not more than a few months into our contract she has already delivered beyond any initial expectations. Other PR firms we have used in the past cannot compare with the professionalism, integrity, and creativity of AHPR. We intend on maintaining a long-term relationship with this firm.
Gerard Casale VP Business and Legal Affairs
Arlene Howard is one of the best, if not the best, in her field. She has been in the business for a long time, which means she's very well connected and knows all the ins and outs. She doesn't accept anyone that just walks into her office, but when and if you are fortunate enough to be her client, she will love you and she will fight for you. Can't be more grateful to work with Arlene.