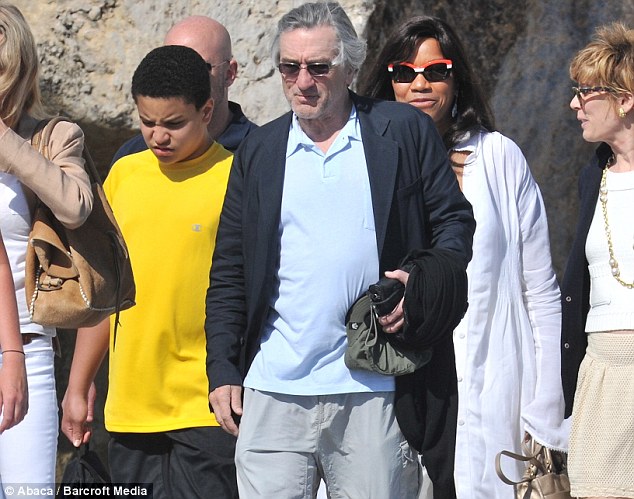 Robert De Niro is widely reckoned to be the world’s trickiest celebrity to interview. He will sit looking morose and mumble monosyllabic answers. Any question about his private life will be met with the sort of thinly veiled menace he provides so perfectly in his film roles.

But there is one subject, as painfully private and sensitive as one can imagine, on which he has been more than happy to talk in recent days — about how his 18-year-old son, Elliot, suffers from autism.

Although the 72-year-old has previously hinted about raising a son with special needs with his wife, Grace Hightower, it wasn’t until recently that he opened up, after his Tribeca Film Festival in New York provoked controversy by featuring a new ‘anti-vaccination’ documentary called Vaxxed.

In two interviews with NBC’s Today show, De Niro, the festival’s co-founder, explained why he had first asked for the film to be included but then said it would not be shown following protests.

Next, in a second about-face, he made clear he was deeply upset about the decision to withdraw the film and urged people to watch it.

Becoming increasingly emotional, the impassive film star revealed that he and his wife believe their son developed autism overnight after receiving an unidentified vaccination jab — understood to be MMR (against mumps, measles and rubella, three common childhood illnesses until the Seventies) — as a baby.

‘I, as a parent of a child who has autism, I’m concerned,’ he said. ‘And I want to know the truth. I’m not anti-vaccine. I want safe vaccines.’

He added: ‘There are many people who will come out and say, ‘I saw my kid change overnight. I saw what happened. I should have done something and I didn’t.’

‘There is a link and they are saying there isn’t and there are other things there . . . There’s more to this than meets the eye, believe me.’ The Hollywood star’s trenchant views are an important voice on an issue that has been a huge medical controversy for the past 18 years.

Significantly, the documentary’s director, British doctor Andrew Wakefield, became a hate figure after he claimed in 1998 he had found evidence the MMR triple vaccine caused irritable bowel syndrome and autism in children.

Donna Harrington Founder/CEO of Furry Angel Foundation
As the inventor of ULTRA-TOOTH and partner of Biodent, Inc. I want to categorically state that our experience with AHPR, Inc. -Arlene Howard PR has been beyond expectations. They deliver what they promise in the exact time frame. They have significantly raised our media profile. Their entire team's work ethics are exceptional. I have had prior PR experiences that fell far short of the promises made but not AHPR. In my book they are the best in the business!