Although she stands at 5-foot-10, the artist Zhenya Gershman is not imposing. Her canvases, on the other hand, are grand, standing up to 7 feet tall, befitting their subjects: actors, musicians and celebrities who very much live up to their billing in the aptly titled new exhibition “Larger Than Life.”

The faces adorning the walls at the Bergamot Station Arts Center’s Building Bridges Art Exchange in Santa Monica should be recognizable, so much so that each portrait carries only a first name. But as intimidating as it might be initially to be stared down by a billboard-sized rendering of Jack (as in Nicholson), Bryan (as in Cranston) or Sting, the artist’s intention is to draw the viewer in, not push him away.

“I have been this height since I was like 12 years old, so I’m very conscious of my body as an artist, and I can only paint big,” the Moscow-born Gershman said during an interview at her home studio in Brentwood. “I always felt comfortable where my body fits into the work of art in a way that I can feel like I can walk into it. I have always wanted people to be able to relate physically to the works of art.”

As is the case with so much of Gershman’s work, the exhibition contains a significant tie to the artist’s family history. One hundred years ago, her great-grandfather operated photography services in Russia that advertised “portraits up to life-size with negatives carefully preserved for re-prints.” To create the “Larger than Life” works, she began not with a living model, but with a photograph. (For the celebrities, Gershman also studied interviews, films and performances. Her research time often took far more time than the actual painting.)

Gershman’s grandfather, Mikhail Lvovich Matusovsky, was a celebrated poet and composer in Russia who wrote — among other things — the well-known song “Moscow Nights.” Because his circle of friends included multiple celebrities, the young Zhenya considered them “just older people, part of my family.”

In her professional life, Gershman has met her share of celebrities, some of whom have commissioned portraits. For the past three years, she has created portraits to honor the Grammy MusiCares Person of the Year. This year’s item, a guitar featuring the eyes of MusiCares honoree Bob Dylan, was signed by all of the performers who participated at the MusiCares gala and then auctioned off. Proceeds benefit people in the music industry who have fallen on hard times.

Whether or not Gershman has met her subject in person, by the time the subjects hit her canvas, Gershman hopes these individuals have become part of her — and her viewer’s — family.

“The idea with these particular iconic faces is to break the ice, break the boundary and make them feel that in some strange ways, they reflect who we are,” Gershman said. “We are learning more about ourselves, so it’s no longer that distance, but what memories and associations come for you. So that face is part of your history.”

“The ‘portrait’ becomes a conceptual device through which the artist also looks at her own self. It is not just the mere picture of a celebrity but a visceral and psychoanalytic interpretation of selfhood,” Dusi wrote in her curator notes.

“In a way, they’re all self-portraits,” Gershman agreed. “Even Clint Eastwood.”

The exhibition’s only two women are not celebrities, but they are certainly larger-than-life figures in their importance to Gershman: the artist’s 7-year-old daughter Nikka and her 97-year old grandmother, Evguenia Matusovskaya, after whom Gershman was named and the subject of a previous Gershman exhibition titled “Baba.”

In the portrait “Secret” in “Larger than Life,” Nikka is whispering in the ear of her great-grandmother. The moment was inspired by an actual encounter that followed Baba’s return from the hospital.

“My daughter was very nervous and so excited for her to come back, and they just reconnected and had this miraculous moment,” Gershman recalled. “I had my iPhone, and I took a quick photo. I witnessed this little secret of these four generations between being passed and I wanted to paint it. I’m really excited to have it in the exhibition.”

Gershman created her first work of art — a portrait –at the age of 10. She took the red, white and black drawing to her mother, who told her daughter, matter-of-factly, “you are an artist.” The family received informal instruction for the girl from a pair of well-known Russian artists, friends of Gershman’s grandfather who were both in their 70s. They looked like “dinosaurs” to the 10-year-old Zhenya, but they reviewed the girl’s work, praising the elements that they admired rather than denigrating the ones they did not.

Gershman had her first solo show at 14. When the family immigrated to the United States, their belongings included a blanket, a set of curtains and a suitcase containing Zhenya’s art. She was not quite 15, and soon became the youngest person ever accepted to the Otis College of Art and Design, according to Gershman. Because she was not yet a citizen, Gershman had to wait for a year to enroll in order to qualify for scholarship funds.

As Gershman became an adult, her career blossomed. She earned an MFA from the Art Center College of Design in Pasadena and worked for 11 years at the Getty Center. She is also the co-founder and president of the nonprofit Project Aesthetics of Western Esotericism that merges magic and art and that looks to explore new dimensions to understanding and experiencing cultural icons of Western European heritage.

Next up: a spring exhibition at the Los Angeles LGBT Center celebrating Gershman’s more than 10 years collaborating with her longtime muse and model Mark Snyder. The LGBT center also will screen “The Artist’s Model,” a documentary about the Gershman-Snyder collaboration.

Viewers hungry for a sneak preview can see Snyder in the current Bergamot Station exhibition.

“He is to me what a Hollywood star would be to other people,” Gershman said of Snyder. “He is my larger than life.”

One of the famed artists that refer to Los Angeles, California as “home” is Zhenya Gershman. Originally from Moscow, Russia, Gershman experienced envious success at the young age of 14, when she had her first solo exhibition in St. Petersburg. Today she is the creator of dozens of portraits; she uses oil and canvas to uniquely interpret the presence and nuance of that which she adores. END_OF_DOCUMENT_TOKEN_TO_BE_REPLACED

Joe Manganiello admires a painting of himself in Santa Monica, Calif., on Thursday. END_OF_DOCUMENT_TOKEN_TO_BE_REPLACED

“There are no bad models, only bad artists. The best way for me to describe what happens when the match is just right is like rubbing two stones together — you get a spark! – Zhenya Gershman

and select other famous faces have in common? A face worthy of capturing in a crystallized moment of their stellar careers, caught in a mixed media composition that reflects an artistic moment for both the performer and the artist. END_OF_DOCUMENT_TOKEN_TO_BE_REPLACED

“There are no bad models, only bad artists. The best way for me to describe what happens when the match is just right is like rubbing two stones together — you get a spark! – Zhenya Gershman

Larger Than Life is a compelling art exhibition by artist Zhenya Gershman. END_OF_DOCUMENT_TOKEN_TO_BE_REPLACED

Art and Music Spotlight: Renowned artist Zhenya Gershman was invited to create a special portrait of Bob Dylan, the Grammy 2015 MusiCares Person of the Year. END_OF_DOCUMENT_TOKEN_TO_BE_REPLACED 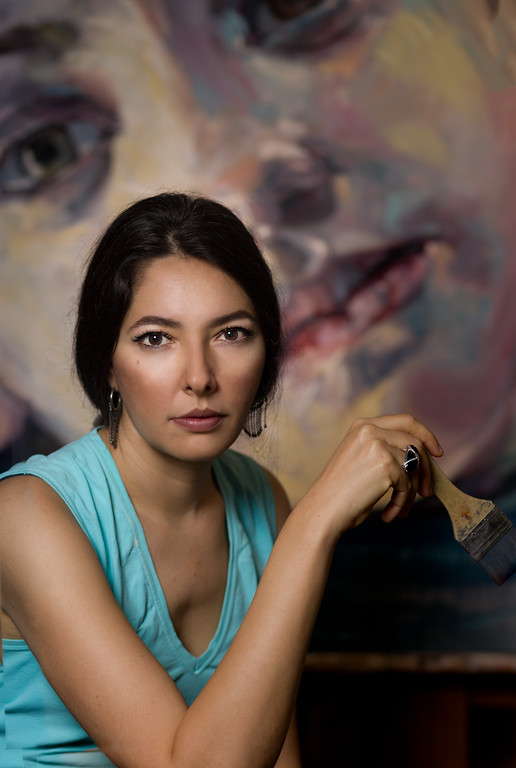 Zhenya Gershman in her studio, photo by Yanina Gotsulsky

These are not pretty people pictures. They are jaw dropping, honest reveals that give the observer a sense of insight and appreciation to the whole of the subject. Zhenya’s art provokes, mesmerizes and intrigues with the sense of energy in what is normally a calm, still subject, and more importantly, Her work creates dialogue, not only about her art, but about the life of the subject she has captured. — April Neale, Monsters and Critics

INTERVIEW WITH THE ARTIST: 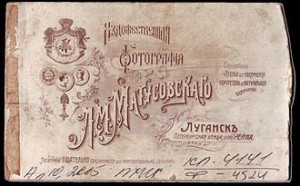 “Over 100 years ago, my great-grandfather Lev Matusovsky advertised his photography studio: ‘Portraits up to life-size with negatives carefully preserved for re-prints.’ At the time, this luring promise was a true technological wonder stretching human perception and recognition of self – photography being a miraculous mirror capturing and reflecting the otherwise fleeting identity. 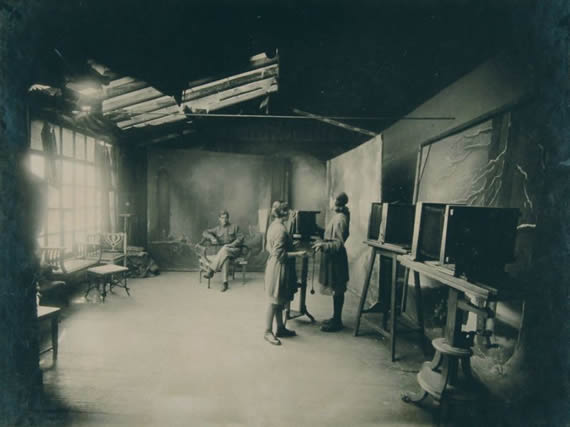 Today, I am working with this family tradition but in reverse: instead of the living model I am using photography as a reference to transform the images into Larger Than Life painted portraits. This series is inspired by a variety of faces from iconic public figures to private intimate glimpses of my family and friends.

I used various dimensions to get closer to my subjects: the recording of their voices, interviews, songs, memories, associations, and film appearances. A curious psychological reversal occurs: while the viewer can easily recognize celebrity faces, slowly these icons begin to fade away replaced by a new persona presented by the painting that takes over the original source. 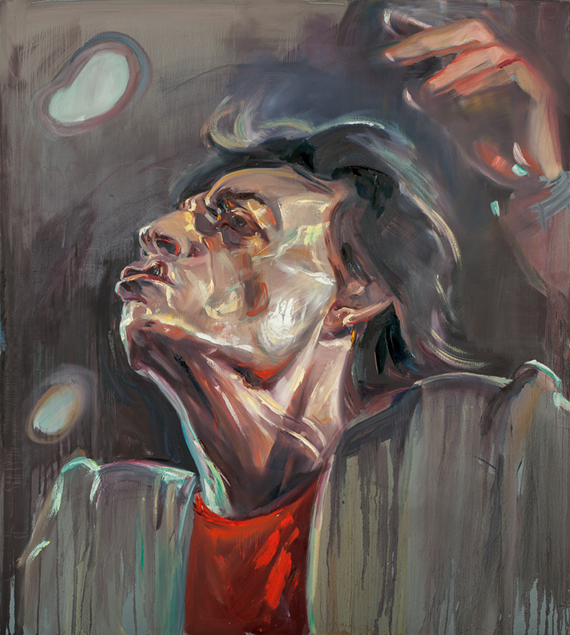 In these monumental portraits not only the size of the image but the very brush stroke is enlarged. In addition to lofty house painting brushes and palette knifes, I had to resort to various sponges, squeegees, and even ceramic tools to carve out the faces in oil paint, creating a highly tactile, sculptural surface. It is as if I had to perform mini-surgeries in paint in order to excavate the complex personalities. 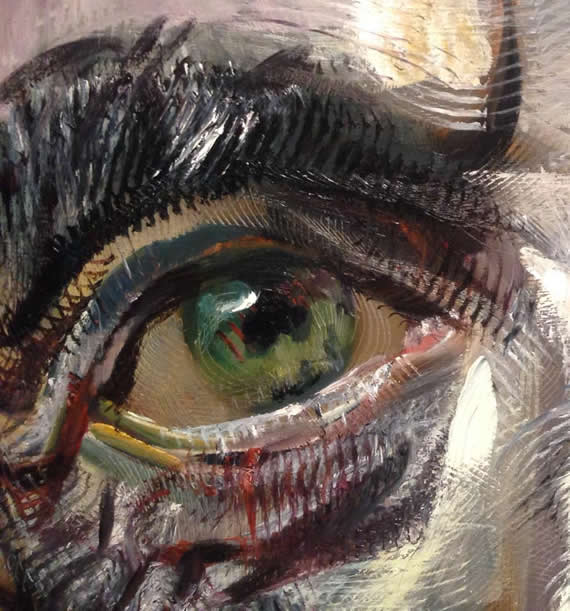 Detail of a portrait by Zhenya Gershman, oil on canvas, 2014

These portraits are literally, poetically, and metaphysically LARGER than LIFE. Like my great grandfather, I used human subjects; only this time the people themselves became the ‘negatives’ that are used to ‘develop’ the works of art.” 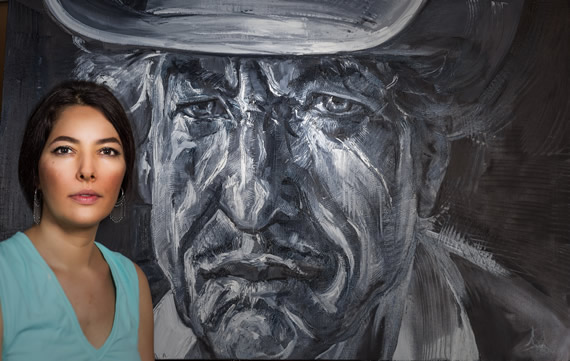 This exhibition runs concurrent with the début of an official

The GRAMMY 2015 MusiCares Person of the Year.

The LA Art Show opens January 14  through January 18. The event celebrates twenty years of bringing established galleries, artists as well as avid collectors together under one roof. END_OF_DOCUMENT_TOKEN_TO_BE_REPLACED

Thom E Lobe, MD Founder, Beneveda Medical Group
Arlene and her AHPR team are simply the best in the business, the “A Team.” Arlene was recommended to me by a physician friend of mine for whom she had coordinated national media spots on top shows like the Today Show and Nightline. Arlene and I have only been working together for a few months, yet she has already arranged appearances for me with Forbes and Wall Street Journal, and I am on track to be on The Doctors as well…such an amazing accomplishment! Arlene and her team are dedicated, hard-working, creative, successful, and to top it off, they are so fun to work with. Arlene truly takes her clients’ interests to heart, and she rejoices and takes pride in their ultimate success! I highly recommend Arlene and her “A Team!”

Ming Wang MD; phD CEO of Aier-USA, director of Wang Vision Institute, Nashville, TN, USA
Arlene Howard PR is excellent at what they do. With only a month on board I’m extremely impressed with not only the attention we are given but with how quickly things are progressing. They’ve taken the time to really understand our business and are by far exceeding expectations.